Presidio County's vaccination rate has far outpaced most of Texas, and according to the state has been at the top or near the top of counties with the most vaccinated residents since the vaccine rollout began.

How did Presidio county reach its vaccination milestone?

Dr. Rachel Sonne heads up the West Texas office for the State Health Department and spoke to Marfa Public Radio's Bárbara Anguiano about the vaccine process in Presidio county.

The following is a transcript of the interview, which has been edited for brevity and clarity.

Bárbara Anguiano: We’ll start with the most recent news. 99.99% vaccination rate* is impressive. It’s more than the national average of about 65%, and state average is about 57%. What does reaching this number mean for the entire vaccine initiative in Presidio County?

Dr. Rachel Sonne: "I think, relative to what we're seeing across the state and across our region, and nationwide, Presidio is very clearly leading that charge.

How accurate is that number? It's only as accurate as all the rest of our numbers. One of the question marks is probably around the denominator. When I look at our current percentages, I do see the rounding up to 100% for partially vaccinated, so at least one dose. For fully vaccinated, I'm tracking 83%. That said, Presidio is doing a fantastic job."

BA: That said, does that change anything, looking forward? The approach? How do you reach those last few people you need vaccinated?

RS: "That's a great question. And I guess I would turn the question back and say, are there a last few people who we need to reach? Or have we done our job sufficiently to create herd immunity in Presidio County?

Because that at 83%, and even potentially at 100% partial, one could argue that maybe the work is done, if you will.  I don't think that a right approach, because COVID is still present. But it's not very present in Presidio. So there's still work to do, but it may not be the emergency that it was."

BA: So when we look across the state, we see other similarly sized counties that haven't reached near the level of vaccination as Presidio. What are you seeing happening in other small Texas counties that's lowering their vaccination rate that maybe was a challenge that you overcame in Presidio, or is it something that you didn't have to that you didn't encounter here?

RS: "My short answer is, I don't think it was something that we public health did to or for Presidio. I really think it's an organic success of the community in the county. Some things that do stand out about Presidio, in addition to the number of entities trying to get their people vaccinated, are...the judge was very proactive.

Judge Guevara, she engaged her colleagues among the tri-counties along with Brewster and Jeff Davis [counties], and really built this volunteer vaccinator workforce. Most of them were just people who were like, 'I want to help. I don't know how, but I'm willing to show up.' And I think that was really helpful, and not to say that other counties weren't doing that. But I think that was really helpful."

BA: You know, locally, health officials were saying it's probably easier to vaccinate thousands of people [in a remote area], than it is to vaccinate millions in a place like Harris County. Still, the region's remoteness did make it harder to reach some older people who don't have reliable internet or aren't computer literate. From that point of view, were you anticipating those challenges?

RS: Sure. I would, I would actually put forward that it comes down to what we mean when we say ‘community.’ And I would argue that the communities in Presidio County have a really strong identity and really function as communities. Internet wasn't even factored into operations, because we didn't expect people to be able to utilize it in the first place.

It really became a statewide awareness that if you want to reach the people who are most vulnerable, because they're the ones who are homebound. Sure, they have a decrease, you know, they don't have a big risk of coming into contact with people who are sick.

But if they get sick, they're at highest risk for severe COVID. We did a lot with just word of mouth, posting flyers. We would go to people's homes, we worked with the schools. And it's not when I say we I don't just mean region 9-10. I mean, all of these entities and all of these entities working together really made this happen. 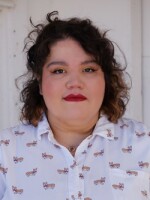