KRTP, our signal in Alpine, Texas, is having issues. We're aware of the problem and working to return to air.

For cactus crooks, the Big Bend region is ripe for the picking

The cactus and the succulent market don’t stop at your local plant nursery. Collectors who want especially rare specimens hit the lucrative cactus black market. And many of those cacti come out of Far West Texas, where the low level of surveillance and high level of unique specimens have made it an ideal location for poachers.

​​On a chilly morning in Alpine, Michael Eason sits at his desk scrolling through cactus listings on Ebay.

Eason, a botanist, is looking for a specimen called the Ariocarpus fissuratus. Squat, furrowed and fleeced with a halo of white fuzz, this plant is exclusively found in West Texas’ Big Bend region. But for the right price, you can get one anywhere in the world.

Eason finds several listings immediately. Some are going for close to $200, others closer to $350. "It’s fairly lucrative for folks to sell wild collected plants,” Eason says, adding that the Ariocarpus can go for even more overseas, upwards of 1,000 dollars.

Eason specializes in the conservation of rare plants, and over the last 15 years, he’s seen populations of cacti dwindle or even completely disappear as they fall victim to the booming underground cactus market. “It's something in the back of the human brain that wants to have especially rare and unusual plants,” he says. “It’s much more of a treasure than just something they bought at a greenhouse somewhere.”

Out of the nearly 1,500 species of cacti worldwide, over 30% are threatened with extinction, and the main cause for the decline is illegal collection.

Currently valued in the tens of millions domestically, the cactus and succulent market is booming. And collectors who want especially rare specimens hit the lucrative cactus black market, where rare, wild-collected cacti go for exorbitant prices online — sometimes in the thousands of dollars. Many of those cacti come out of Far West Texas, where the low level of surveillance and high level of unique cacti make it an ideal location for poachers.

For years, Eric Jumper, a former U.S. Fish and Wildlife agent, oversaw cactus poaching cases in the Big Bend region. According to Jumper, cacti trafficking has run rampant in the area since at least the 1970s. But he says it took a bit of convincing to get U.S. attorneys to take up the cases, especially in Texas, where immigration issues and drug issues are more likely to get their time.

Jumper says cacti ultimately took over the last decade of his career. His department cracked down on multiple poaching operations, recovering illicit shipments from all over the Chihuahuan desert. But, despite his efforts, Jumper is positive cactus poaching will only ramp up in the coming years, which he fears poses a threat to endangered species.

“We just couldn’t believe the hunger for this part of the world and the cactus in it,” says Jumper. “The demand is so strong I don't think you can keep up with the supply.”

And even when the smuggled plants are intercepted, there’s little hope they can be returned to the desert successfully. Once a plant has been removed from the ground, it’s difficult to return it without issue — to do so, you would need the exact location from where the cacti was stolen, which poachers never provide. And even with that intel, animals can sense the plant has been disturbed and will often dig them up.

Instead, the plants end up in various greenhouses and botanic gardens around the country, like the one at Sul Ross State University.

Karen Little manages the university's greenhouse, which is filled with all kinds of recovered specimens — some are squat and bristled, while others twist out of their pots, their furry stems arcing through the air.

In the last four years, Little’s greenhouse has become a haven for black market cacti. They come by the truckload, some deliveries numbering in the thousands. Most of them arrive in garbage bags, which doesn’t bode well for their survival. “No cactus lover would ever put them in a garbage bag,” says Little. “They know they’re going to kill them that way.”

And because these cacti can’t be repatriated back into the wild, Little does what she can, trying to salvage the plants and find them homes. She receives calls from people all over the world looking to buy recovered cacti, in particular, the Ariocarpus fissuratus . But, in an effort to keep them close to their natural habitat, Little gives the plants to locals, many of whom send her photos in August and September when they bloom.

“They’re gorgeous when they’re blooming,” says Little. “The first year I had thousands of them, it was just overwhelmingly beautiful, but it was sad. I’d rather walk up a hill and see them blooming than in my greenhouse.”

But botanists say as long as the demand for this illicit market exists, there may come a time when it will be easier to find certain cacti online than in their natural habitat. 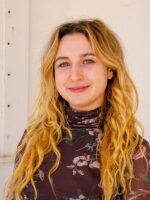 Zoe Kurland
Zoe Kurland is a podcast producer at Marfa Public Radio.
See stories by Zoe Kurland
Get Our Newsletter
Who's being interviewed?
When's the next radio party?
Sign up to get occasional updates.
Sign Up
Latest News